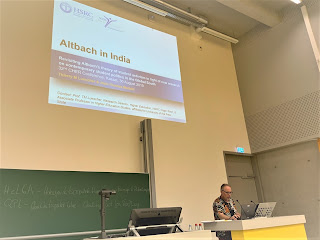 Altbach in India is a presentation that I gave on 30 August at the 32nd Annual Conference of the Consortium of Higher Education Researchers (CHER) hosted by INCHER in Kassel, Germany. Prof Maria Yudkevich from HSE  Research University, Moscow, was chair of the session and took this picture.

Our argument and study is about analysing the 'longevity' of Altbach's pioneering theoretical work on student politics in India in the 1950s/60s/70s. It argues that amidst the massification and privatization of higher education, dissentive student politics emerging from flagship public universities is on its way to becoming a cornerstone of Indian democratic participation (Martelli 2018). Accordingly, student politics in India has entered a new phase of mobilization and activism. This is evident in protests at the Film and Television Institute of India, Pune, the Hok Kolorob movement at Jadavpur University, Kolkota, and the Rohith Vemula agitation and other student mobilizations at Jawaharlal Nehru University in New Delhi, to mention just a few. Related recent studies suggest that higher education research on student politics in India has equally entered a new phase in which the agency-centered concepts of political generation, biographical availability, free space, counterculture or value-based mobilization are gaining currency against previous understandings, which perceive educated youth as cohorts reproducing caste and gendered social structures, party politics and consumerism.

Jean-Thomas Martelli and I decided to revisit the theoretical insights gained by Altbach in his five decades of scholarship on the topic of student politics and activism, in light of latest research on the student movement in the Global South. In particular, we are doing a small study to analyse contributions to a forthcoming volume on student mobilization and activism in contemporary India and South Asia (Parkar & Martelli forthcoming). We engage with the contemporary transformations of student politics in South Asia by re-examining Altbach’s insights on the mobilizational legacy of the Indian independence movement, on the elite-in-the-making leanings of student participation, on the shift of campus participation towards demand-based politics, and on the importance of student movements as springboards for new political leaders. The paper thus interrogates the theoretical relevance of Altbach’s work for understanding current metamorphoses of political representation in the Global South.