What does Student Governance mean? 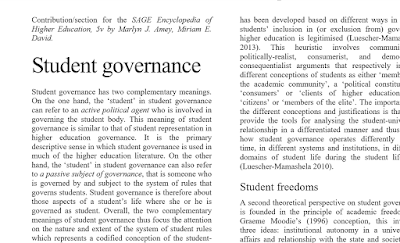 When I decided in 2002 to write a Master's thesis on student governance at the University of Cape Town (which eventually became a PhD), I only knew the term student governance in the way we had used it in 1999 as a Students' Representative Council ("It is what we are meant to be doing") and eventually the way we defined it in the context of the far-reaching UCT Student Governance Review of 1999-2002. The formal definition we came up with then was:


"Student governance consists of the structures and processes implemented to:
(1) reflect and guide the needs and views of students within the University's governance system; (2) represent the interests of students in the institution; (3) execute and initiate key functions in the interest of students, (a) oversight of student activities; (b) leadership and development of the student body; (c) advocacy of student interests; (d) provision of benefits to the student body; (4) focus student attention on challenges facing society; (5) facilitate student participation in national higher education policy development. (SGR 2000: 7).

Now that was a dam-good definition; perhaps for an SRC a bit to formulaic; and it was not really reflective of what we did, of our political commitments and the struggles we were fighting: fighting for students against academic and financial exclusion, organising and leading protest marches, holding meetings in residences and on upper campus, rallies, oh the pamphleteering (where was Twitter!), taking racist lecturers to task, and then all the speechifying for every other thing on campus. And the Fish Eagle with Appletizer, not to forget.

After having studied student politics for a long time, reading and researching, and writing about it; in the process writing an entire PhD about it, and having been supervised by a political philosopher (for my sins! - but thank God for THAT training!), my definition of student governance has changed quite a bit. The SGRs' definition of 2000 I would call a quite formal definition of 'student representation' rather than one of student governance, and I would also point out to some limitations ..."structures" ... and "processes" that are "implemented"...  too much functionalist policy speak. But as I say, it is a good definition.

So what does Student Governance mean? I had to answer that question in less than 1000 words, and for me, that is not easy :) :) The above snippet gives an idea: student governance, in my view, is different from concepts like student participartion, student representation, or so, by the idea that governance is related to rules - the making and changing of rules, and the effect that these rules have. Governance is about regulative politics, and student governance is about both being governed by student rules and participating in the making and changing of these rules.

The impossibility of separating learning and development: What Covid-19 teaches us