Reflections on the Student Experience and Student Life in Europe in the 20th Century - J Burkett Book is out! 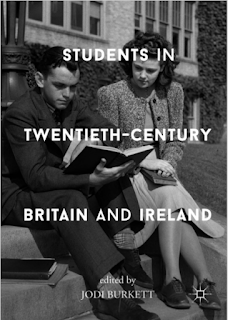 It's quite unusual for me to publish a chapter in a book on student life in Britain and Ireland in the 20th century... after all, my work is typically about the student experience, student life and student politics in South Africa and other African countries.

But that has to do with the 'evolution' of this book as a whole (which has been several years in the making), and my specific contribution which is theoretical and structured in terms of ten propositions about student politics in the 20th century.

The ABSTRACT of the chapter
Student activism is ‘a highly complex, many-faceted phenomenon’ for which serious systematic efforts at understanding it only emerged as a scholarly response to the student revolts of the twentieth century. Until the mid-1960s, student activism was thought of as more characteristic of developing countries than the industrialised countries of Western Europe and North America, even though students had historically been part of the political equation there, for example during the Bourgeois revolutions of the 1840s. The student activism of the late 1960s stands out, however, as perhaps the most significant student political period of the twentieth century in Europe and North America. Philip Altbach was there. As a student at the University of Chicago, he was part of the anti-war Student Peace Union (SPU) from its establishment in 1959 and served as national chairman of the SPU from 1959 to 1963. In the early 1960s he turned his attention to studying student politics rather than actively participating in it. During this period he produced his PhD thesis, Students, Politics and Higher Education in a Developing Society: The Case of Bombay, India, and began to make a name as an emerging scholar on student politics in America, India and the developing world (working on related topics with Seymore Martin Lipset), and he tried himself as scholarly commentator on matters such as the civil rights movement in the US. This chapter sets out to order Altbach’s theoretical contribution systematically, by formulating ten propositions for understanding student activism in the twentieth century based on his work.

1 Introduction: Universities and Students in Twentieth-Century Britain and Ireland (by Jodi Burkett)

2 On Going Out and the Experience of Students (by Matthew Cheeseman)
3 Prisoner Students: Building Bridges, Breaching Walls (by Daniel Weinbren)
4 ‘Education not Fornication?’ Sexual Morality Among Students in Scotland, 1955–1975
(by Jane O’Neill)

5 ‘Forgotten Voices’: The Debating Societies of Durham and Liverpool, 1900–1939 (by Bertie Dockerill)
6 The National Union of Students and Devolution (by Mike Day)
7 Investigating the Relationship Between Students and NUS Wales (by Jeremy Harvey)

11 Rebels and Rustici: Students and the Formation of the Irish State (by Steven Conlon)
12 ‘Women Are Far Too Sweet for This Kind of Game’: Women, Feminism and Student Politics in Scotland, c.1968–c.1979 (by Sarah Browne)
13 Altbach’s Theory of Student Activism in the Twentieth Century: Ten Propositions that Matter (by
Thierry M. Luescher)