Tweeting #FeesMustFall - Some early results from the Social Media Analysis

Resistance against neoliberal higher education policies is a global student concern. In South Africa, the effect in the university sector has been a level of contentious student politics that is unprecedented in the post-apartheid era. The new SA student movement of 2015/16, known by iconic twitter handles such as #RhodesMustFall and #FeesMustFall has come to spark an unprecedented amount of research into student politics and opened up new lines of inquiry.

Together with Prof Tanja Bosch from UCT and Nkululeko Makhubu from HSRC, I have had the fascinating experience to do a "social media network analysis" or digital network analysis / DNA on a number of twitter handles and hashtags related to the student movement. At the most basic level, an analysis of tweets and tweeters can show, for example, who were the top 10 tweeters who tweeted the most, as in the first figure. 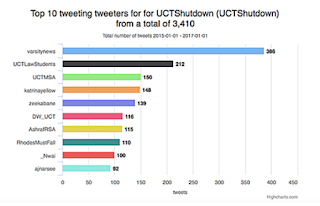 A more complex analysis can show how different tweeters (or rather: twitter handles) are 'connected', that is, who tweets to whom (e.g. by means of a mention) or who retweets or quotes a tweet from who, and so forth. That then gives quite cool network maps, like the one below, where one can see the relationship between major online news sites (e.g. theCapeArgues, Netwerk24, News24, SABC_online) and student handles such as @Shackville and @RhodesMustFall. Our analysis argues that the DNA structure illustrates the argument made by RMF life-tweeters, that they used Twitter for (what I would call) movement propaganda purposes; and it reflects the flat movement leadership structure. All of this and more will be revealed and elaborated on in our chapter in Richard Davis book. 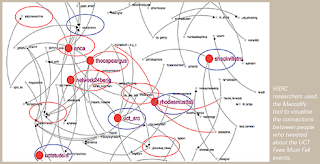 I made a presentation at the 2018 HSRC Social Sciences Research Conference in Tshwane, South Africa to summarise findings that Tanja, Nkululeko and I are busy publishing in a forthcoming book published by Routledge. The article called "Tweeting #FeesMustFall" was published in December in the HSRC Review and deals with #FeesMustFall-related Twitter activism by students at the University of Cape Town in 2015/2016. It's short and sweet.

Enjoy. The HSRC Review article can be downloaded freely here.