The 2015/16 Student Movement in South Africa 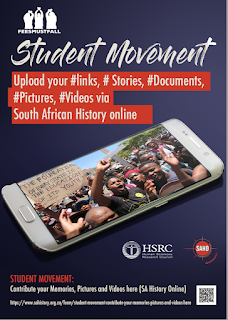 I come to this research from mainly two angles: firstly, my long interest in student representation in higher education governance, student politics more generally, and more recently, attempts at trying to theorize / 'codify' and better understand Philip G. Altbach's work on student activism; and secondly, from my work on student engagement with citizenship and the role universities in Africa can play in the democratisation of state and society.

The research project "The New SA Student Movement: From #RhodesMustFall to #FeesMustFall" is an expression of this interest. The project is 'housed' at the Human Sciences Research Council and supported by a Mellon Foundation Grant. It includes in the research team a number of notable higher education commentators and activists (past and present).

This project collaborates with South African History Online in the collection of pictures, video-clips, and documents from former student activists, observers and the public, and in the archiving of research generated by the project. 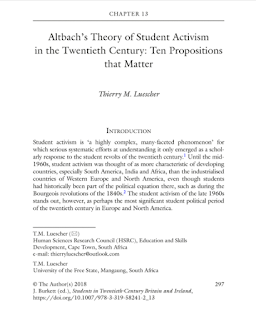 As part of better understanding the student experience of higher education in Africa and its relationship with democracy, citizenship development, competency development, and more specifically, my work on student politics in Africa, I have come to see much value in the work of Philip Altbach. Altbach was a student leader at University of Chicago in the 1960s and part of the Students' peace movement there. He did his PhD work on student politics in India and then continued to have an interest in student politics and activism for almost 50 years of his career as higher education researcher. My work may be called an attempt at synthesising and global southernizing even further his work which was in large parts already shaped by empirical work in the Global South.

While efforts at improving the student experience of higher education linked to Student Affairs functions have been key in developing student lifecycle models and mapping support functions to various 'moments' in the student life (stages and transitions), this research project which at this stage is mainly conceptual and focused on the postgraduate student lifecyle, seeks to expand related models to become theoretically pertinent, policy-relevant and practice-oriented. 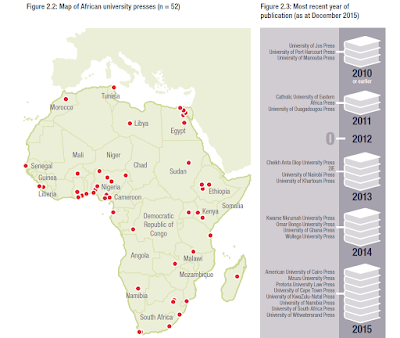 African Minds Research has been growing over the years; this projected started in 2015 and is led by Francois van Schalkwyk and me. The project maps the landscape of African University Presses and consider ways of how they can be supported to take advantage of the opportunities provided by the digital age of publishing.

The project is at an advanced state; a database of all AUPs has been developed and case research covering the continent North to South, and East to West is currently ongoing. More info on this exciting project which will hopefully not only lead to a better understanding of academic publishing in Africa, but also to more support for African University Presses and the important role they play in knowledge production and academic careers on the continent, can be found here. 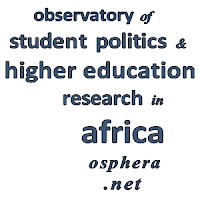 'Student Representation in Higher Education Governance in Africa' is part of a large and ongoing programme linking academics, students and student affairs professionals from across the African continent and beyond in several projects of research, training and advocacy.

The continent-wide research deals with recent changes in student politics and student participation in higher education governance in the Africa. The project is led by Thierry Luescher (UFS/CHET), Manja Klemencic (Harvard) and James O. Jowi (Moi/CHEPS) (as editors of the publications). It includes researchers from Botswana, Burundi, Cameroon, Ghana, Ethiopia, Kenya, Nigeria, Tanzania, Senegal, South Africa, Uganda, and Zimbabwe, as well as France, the USA, the Netherlands and Norway. A symposium with authors was held in August 2014 (see blog). This project is conducted under the auspices of the African Minds Publisher and supported by the Carnegie Corporation of New York.

Training work related to the project addresses both the knowledge production needs in this under-researched area as well as the training and capacity needs of student leaders. The former includes publication projects linked to author development workshops, while the latter directly supports student representative structures as well as student affairs professionals with training material and facilitation.

Purpose: Understand changes in student representation in HE governance and its links with the democratisation of politics in Africa, including political parties, and the massification of higher education on the continent.

Design and Methods: This is a publications project of African Minds; the contributors use various designs. The project further includes workshops with emerging scholars/authors on academic publishing, open access publishing and scholarly writing.

This project is funded by Carnegie Corporation of NY.

A symposium on student representation in higher education governance in Africa and authors' workshop was held from 20-22 August 2014 at Palm House Guest House in Wynberg, Cape Town.

The book Student Politics in Africa: Representation and Activism is expected to be published in 2016, accompanied by a special issue of the Journal of Student Affairs in Africa Vol. 3(1) 'Student Power in Africa', both published by African Minds.

The project has led to the formation of Osphera.net, the Observatory of Student Politics and Higher Education Research in Africa.

A HERANA project "The University, Student Development and Citizenship" coordinated by the Centre for Higher Education Transformation, Wynberg-Cape Town.

Purpose: Determine the kinds of student activities by which key flagship universities in Africa contribute to students' attitudes and behaviours towards democracy, citizenship and social justice.

This project is funded by a number of funders, including NORAD, Carnegie, Ford, Rockefeller, and Kresge.

The project has led to a number of publications, including a chapter in the book Knowledge Production and Contradictory Functions in Higher Education in Africa (2015).

'Space' and the transformation of higher education in South Africa

Philippa Tumubweinee, a professionally qualified architect and senior lecturer in Architecture is using a 'spatial lens' analysing social relations on South African university campuses. Her PhD in Higher Education Studies is co-supervised by Prof Loyiso Jita of UFS and me.

Why does student activism turn violent?


Providing Access to Higher Education for Poor Students in SA: the Case of the UWC Work-Study Programme

A project dealing with questions of access and social justice to higher education, looking specifically at the experiences of students on the UWC Work-Study programme.

Mixed design (survey & interviews) - all conducted independently by HEMA student Refiloe Mohlakoana under my supervision and the co-supervision of Prof G Ouma.

System-level Governance in Botswana and the Tertiary Education Council

A project  to analyse the functions and roles of the Tertiary Education Council in Botswana, and tensions arising it its work. The project is loosely linked to the HERANA II project on national commissions / councils in African higher education.
Mixed design (surveys and interviews) - all conducted independently by HEMA student Ketumetse Lebotse from Botswana under my supervision and the co-supervision of Prof G Ouma.

The Engaged University in Africa


What accounts for the success of African doctoral students in a historically black university in South Africa?

A PhD study dealing with the question of what markers of habitus and cultural capital are evident in successful black doctoral students.
Conducted by: Benedicta Daniel-Ogetenega under the supervision of Prof Beverley Thaver and me.

A PhD. study dealing with the question of how poor UWC students engaged politically with their unmet financial need in the years of great higher education policy change in South Africa (1995-2005).'
Conducted by: Mlungisi Cele under the supervision of Prof Theresa Barnes and me.

Masikhulisane - Student Experience at the University of Cape Town

From HERANA's point of view this is also a sub-project of "The University, Student Development and Citizenship"; however, our part in this is focused only on the so-called Citizenship Module in the SERU-questionnaire used by UCT. Overall, it is a project of the Department of Student Affairs of the University of Cape Town.

Purpose: Determine the impact of different dimensions of the student experience at UCT on students' academic performance.

A study of new approaches to teaching and learning in political studies at the University of the Western Cape.
Purpose: Analyse academic journaling and other learning methods.
Design and Methods: Experimental use of new teaching and learning methods; analysis and evaluation of effects on academic achievement; reflective practioning.
The project was discontinued in 2012 after the key research questions had been answered without requiring further empirical research. 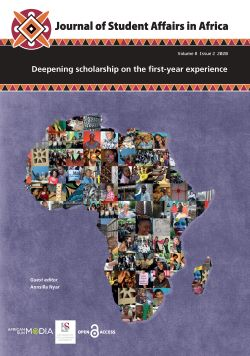